The Greenacre project is a community organisation set up by a group of individuals in order to promote community values, sustainable living, green transport and protection of green spaces.

We have set up GREENACRE TRANSITION FINCHLEY as part of the Transition Town movement. Whilst still at an embryonic stage it is in existence with a steering group and holds regular meetings. Transition Town thinking is all about making the transition from a high carbon lifestyle to a more localised low carbon lifestyle. Food and transport are key issues. Cycling is at the heart of local green transport.

We publish the GREENACRE TIMES bi-monthly. This is a 44 page A5 green community magazine. As well as cycling, we cover environmental issues, green spaces and a littlocal history. The Greenacre Times is now in its third year. We also have the GREENACRE WRITERS, creative writing groups and workshops that meet twice a month.

The GREENACRE BICYCLE RALLY is the focal point of our cycling campaign. This is a high profile, once yearly, mass cycling event run within BIKE WEEK and also as part of the LOVE LONDON green festival in June each year. 2010 will be our third year. Although the GBR attracts both media attention and many participants our cycling campaign is ongoing and perpetual. We hold bicycle maintenance workshops and have helped people repair unroadworthy bikes and taught people in the community basic cycle training to get them started. One woman had not ridden a bicycle for 37 years due to a road accident; by having a series of one-to-one sessions, she slowly gained confidence and even took part in last years bicycle rally. Another young man had bought a bike a few years ago but had been too frightened to ride it on the road, he joined one of our cycle maintenance workshops and we encouraged him to take part in our beginners cycle rides; he too took part in the bicycle rally. We run Dr Bike sessions both at the GBR and the weeks leading up to the event. We are in liaison with various local groups including Local Agenda 21, Barnet Cyclists, Enfield Cyclists, Friends of the Earth and The Barnet Environmental Action For real in Schools’ (known as BEARS) where we have worked with both teachers and pupils in promoting cycling. Incidentally Enfield Cyclists attended the GBR two years ago and were so impressed with our rally that they decided to hold their own festival, they are lucky enough to have full support from Enfield Council. Last year we worked in partnership with The Larches Trust, a registered charity set up to provide care and opportunities for adults who have a learning disability. The Trusts approach is holistic and values each individual. They aim to develop and run vibrant, leisure and recreational programmes. Provide exciting, meaningful learning programmes including independent living skills. Establish supported living where each person feels a sense of belonging. Cultivate inclusive relationships for adults with learning disabilities.

We are very keen to promote cycling in this borough both as a fun recreational activity and as a serious form of transport. We continue to push very hard for cycle lanes, more stands, better training and publicity as well as raise the safety issue, which we have been repeatedly told is a stumbling block to getting people to take to their bikes.

We run the GREENACRE TOOL BANK which is basically a sort of ‘freecycle’ facility centred around tools of every description and have built up quite a number of disused cycles awaiting repair as well as a good collection of spare parts.

Last year we rescued a Bangladeshi rickshaw from outside an arts workshop in Finsbury park. We brought it back to Finchley where I was assisted by a small group of teenagers in restoring it to its former glory. Both myself and the boys thoroughly enjoyed the project – though it’s had work to pedal!

We are currently building a bike trailer from birch plywood, scrap metal and a pair of 15” wheels rescued from our local Council dump. When finished it will join the Rickshaw and ‘Spokey Joe’ (a ‘tent on wheels’ type kiddie trailer) on our promotional tours of local shopping centres.

We are lucky to have a large area of green spaces in the borough and many of these are suitable for cycling. Last year we organised several leisure rides, with the novice in mind. At one of the rides a couple of people confessed they hadn’t had the courage to take their bikes out including one lady who said she had a brand new bike unused for over two years! We allowed 20 minutes for checking bikes for road-worthyness.

Last March I led another group of cyclists to Sanders lane in Mill Hill NW7. This was in support of local residents who were trying to stop plans to have the lane widened and opened to motor traffic. On that day 48 cyclists assembled in my back garden! We were joined by more cyclists on route and eventually totalled 69. The publicity no doubt influenced the council, who subsequently backed down – Sanders lane is till only open to pedestrians, cyclists, dogs and horses.

Several local cycle shops have helped us with tools and equipment. Last year we gave out 80 sets of hi-viz waistcoats and puncture repair kits to children. Our work continues and is very much ongoing. Proper funding would enable us to carry out all our plans for the forthcoming year including cycle training, making cycling videos, cycle workshops, rides and of course the cycle rally which last year had 169 registered riders.
Posted by Rosie at 17:25 No comments: 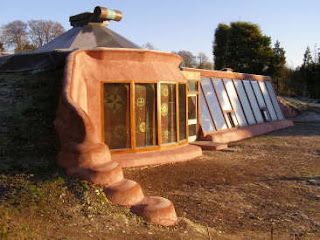 This was the Low Carbon Trust's first project and was the first Earthship to be built in England. The project was built as a community centre for use by Stanmer Organics, built on a Soil Association accredited site in Brighton. This pioneering demonstration project has evolved over the last six years and enables people to come and experience a cutting edge eco-build and be inspired to respond to climate change in their own ways back at home and work.